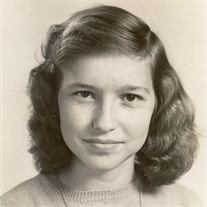 Alba “Faye” Moser passed away peacefully at Asbury Place Assisted Living in Maryville, TN on October 2, 2017. Faye was born on January 24, 1934, in Blount County and spent her childhood years growing up in Townsend, TN. She was a member of Tuckaleechee United Methodist Church in Townsend, TN, of which she spent many years singing in the choir and being active in Women’s Groups and Bible Study Groups. She spent her last three years in Assisted Living, primarily Asbury Place in Maryville, TN. After graduating high school, Faye moved to Washington DC to work. It was there she met her future husband to be, Jack, while he was on leave from his Navy ship. After marriage in 1953, they spent the next 63 years by each other’s side until Jack’s passing in February 2017. They moved to Southern Indiana, Jack’s home place, before settling in East Tennessee for keeps a few years later. Faye supported her husband in his time as a Methodist minister in the Holston Conference from 1959-1974. Faye was ever much the consummate minister as well for the care and involvement she exhibited for the congregations they served. Faye spent the majority of her work career in banking, primarily as a bank teller. She loved meeting and interacting with the customers. Faye’s life was truly a celebration of a life well lived. A never wavering faith and compassion for others adorned her desire to bring happiness and joy to others, friend or stranger. She was the angel and light of her son’s eyes as her support for him in all his earthly paths were ever present and cherished in his heart. There was no challenge too large that her love didn’t shine through and overcome. Heaven has a new member in its choir of angels singing praises to the grace of God always within grasp for those who seek it. Faye was loved by all who had the fortune of sharing time with her, both for an instant or for life. Preceded in death by: Husband, Jack Moser; Father, Claude Johnson, Sr.; Mother, Nell Johnson; Brother, Claude Johnson, Jr; Nephew, Ronnie Johnson. Survivors include: Son, Michael Moser; Grandchildren, Andrew Moser and Meghan Moser; Brother, Ted Johnson; many nieces and nephews. The family will receive friends from 5:00 until 7:00 PM, Thursday, October 5, 2017 at Smith Trinity Chapel. Funeral service will be at 7:00 PM with Rev. Richard Rudesill officiating. Special music will be provided by Holly Roe. Family and friends will assemble for interment at 10:00 AM, Friday, October 6, 2017 at Tuckaleechee United Methodist Church Cemetery. In lieu of flowers, memorial donations may be made to: Tuckaleechee UMC Choir or Missions, 7322 Old Tuckaleechee Road, Townsend, TN 37882.

From the Upper Room: